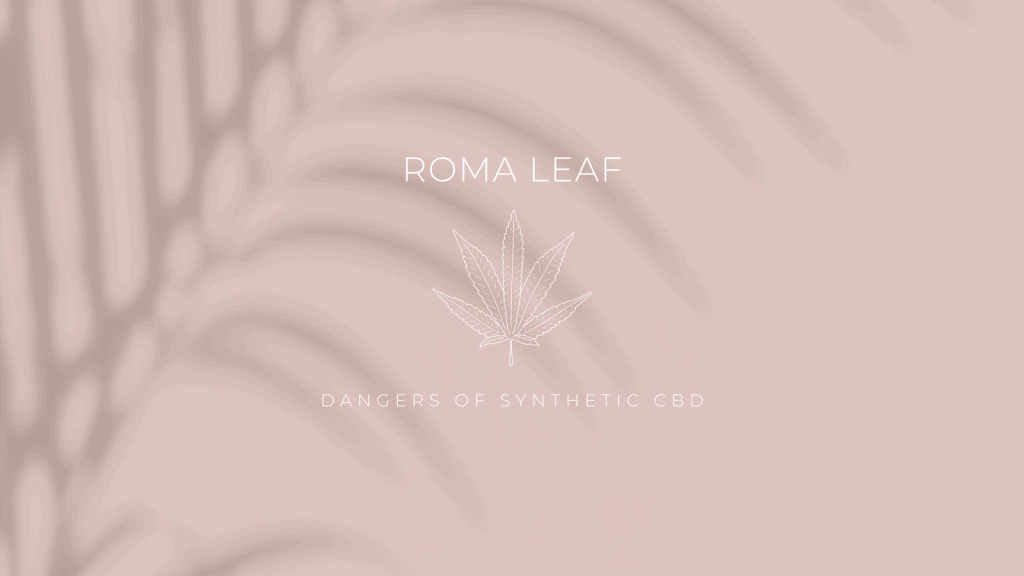 Recently, CBD and Hemp have become a popular way of relief. CBD is generally known for its calming properties and for help with sleeping issues. But when it comes to choosing the right CBD for you, most people are unaware of the different types available. There has been a steady increase in the popularity of CBD and due to this there are “synthetic” or lab made products that have made their way to the shelves. This article aims to discuss the dangers of synthetic CBD.

How would someone know where their CBD products were naturally derived or synthetically produced? You don’t. Both have the same structure and there is nor federal or industry guidelines for companies to disclose how they source their CBD. This is a serious problem that threatens the mass-market of legitimacy and is a danger to the everyday person.

In order to differentiate natural and synthetic CBD, it is important to know what CBD is. 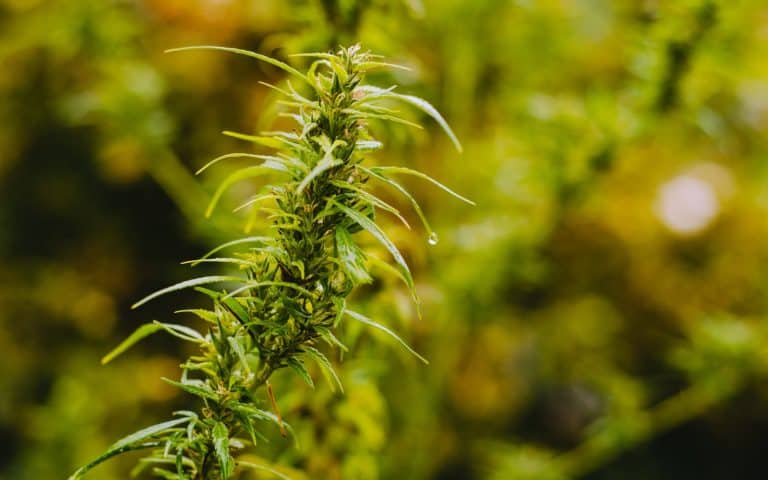 Chemically synthesized CBD is an Active Pharmaceutical Ingredient (API) produced in the form of crystalline powder. It is identical to natural plant-derived CBS at the molecular level. Synthetic CBD is obtained in the laboratory. As of now, none significantly are different from the naturally derived cannabidiols in the way that they are structured. Synthetic CBD is also referred to as “pure CBD” because it has been the default form of CBD that is used in any type of research.

Even though natural and synthetic CBD are chemically identical, there have been some issues with synthetic CBD. There were people who fell ill in Utah, Chicago, Connecticut, and Washington. There was a poison outbreak that was linked to the consumption of synthetic cannabinoids. The Food and Drug Administration (FDA) released a statement regarding the manner in July 2018, issuing a warning with the concern of significant health risks that come with the consumption of contaminated synthetic cannabinoid products. 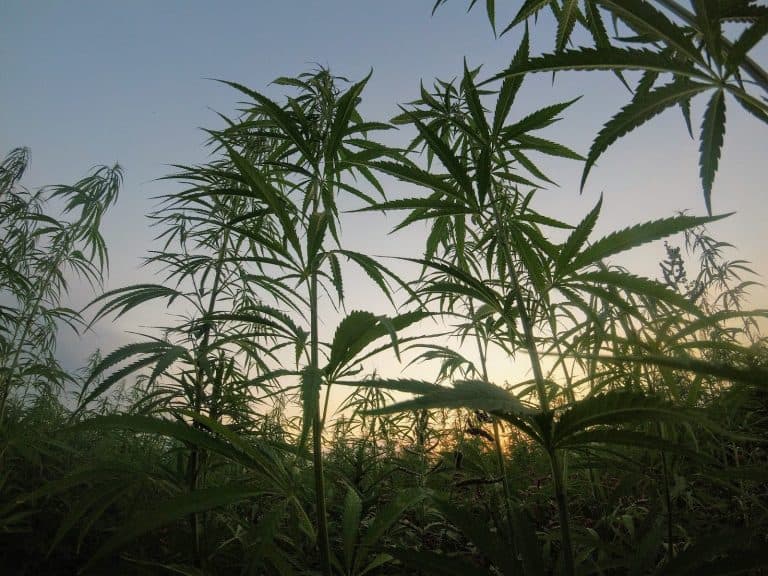 For those who don’t react to synthetic CBD after the first use, but use the product often, physical and psychological problems have been known to develop over time. There is also the issue with withdrawal. If someone suddenly stops using the product, they can experience severe withdrawal symptoms including rapid heart rate and difficulty breathing.

Synthetic CBD is more cost-effective for pharmaceutical companies, which is one of the reasons why the drug is being mass produced.

Though synthetic CBD holds many dangers, the extraction process of natural CBD is extensive.  Most wonder how CBD products are made, but the truth is natural CBD oil is extracted from the hemp plant. There are several different methods of extraction,  the most common being carbon dioxide, steam distillation, hydrocarbon or natural solvents. All methods have their perks as well as their faults. All extractions involve filtering the hemp plant in a controlled environment and pressure which results in CBD oil.

This type of extraction uses supercritical carbon dioxide to separate CBD oil from the plant. “Super Critical” or supercritical fluid refers to the CO2 properties of both liquid and gas states. During this process a series of pressurized chambers and pumps expose carbon dioxide to low temperatures as well as high pressure. A liquid is then released which contains high amounts of CBD. 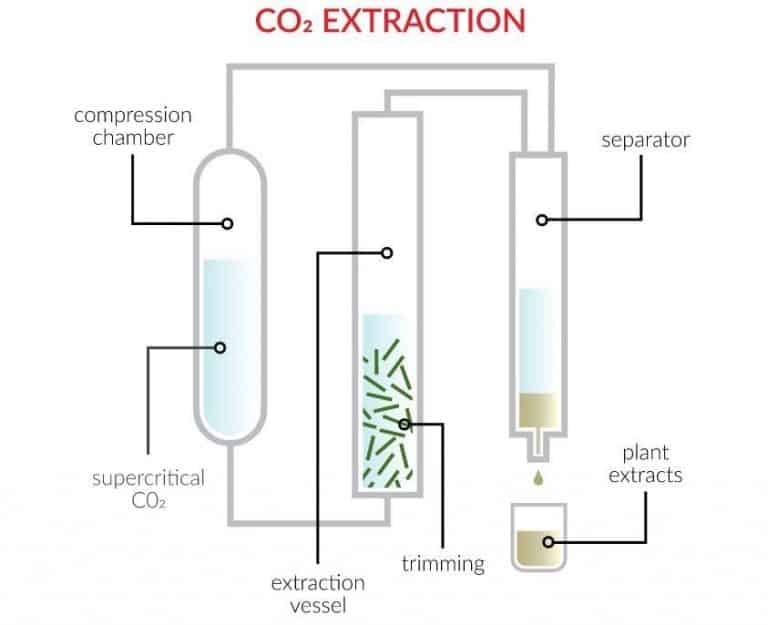 As you can imagine, this process requires very expensive, specialized machinery. CO2 extraction is the common method for extraction. It is safe and very efficient for mass-production. This method can provide as much as 92% of oil. The nature of CO2 extraction makes it perfect for producing fixed concentrations of CBD oil. Manufacturers can adjust the pressure and ratios to reach the desired concentration of CBD. This extraction process is also commonly used in various other products. Some examples are decaffeinating  coffee or tea, and extracting essential oils.

With this method, steam caused the oil to separate from the plant. The hemp plant is put in a glass flask, with an input and the output. The input is connected to another glass container. Beneath the flask, there is water that will boil, creating the necessary steam. 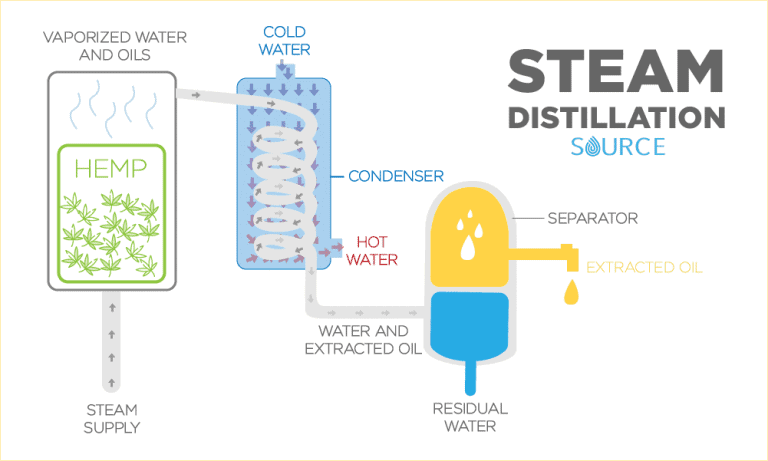 This technique has been used for centuries, but the CO2 extraction method is preferred. This is because steam distillation isn’t very efficient and takes longer than CO2 extraction. Steam distillation requires a large amount of plant and is more difficult to extract. This method is also a lot more dangerous than CO2. If the steam gets too hot, then it could damage the extract and affect the properties of the CBD it has.

This method involves Hydrocarbons and natural solvents. Solvent extraction is similar to steam distillation with the difference that it uses a solvent rather than water. This results in a mixture of CBD oil with solvent. When the solvent evaporates it leaves behind pure CBD oil behind. This is similar to the water and salt evaporation process. When salt water is left out, water is evaporated, leaving salt behind. Solvent Extraction uses either hydrocarbons or natural solvents. 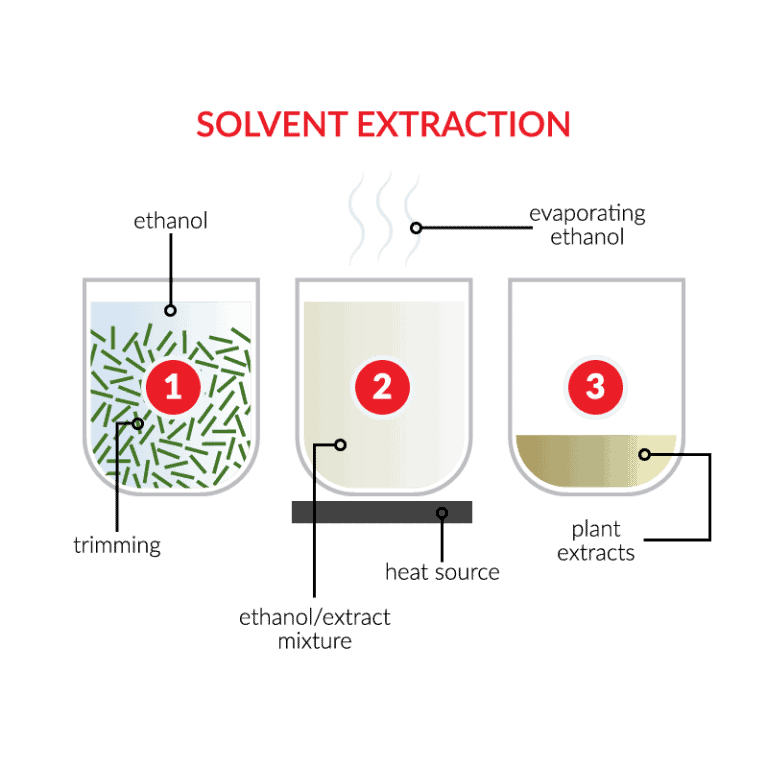 Solvent extraction is more productive than steam distillation as well as less expensive. The solvents (hydrocarbon) cause great concern. The residue is very toxic and if it isn’t fully gone during the evaporation step, it could be very dangerous for those who consume it. Some studies found traces of dangerous chemicals.

Founded in 2019, Roma Leaf is a family-owned and operated company based in Los Angeles, CA. Our Co-Founder suffered from severe migraine headaches for years, and her father had terminal pancreatic cancer that caused acute pain and discomfort. Both she and her father were hesitant to use prescription medications due to the overwhelming amount of side effects and the possibility of addiction. After searching for alternative pain relief, they discovered CBD oil.

Immediately, both she and her father discovered that CBD oil is an effective method of pain relief. Having two products, Roma Leaf is dedicated to helping the everyday person get back to their daily activities. Roma Leaf’s main mission is to better the lives of our customers by providing the highest quality products with a company our consumers know they can trust.

Is Synthetic CBD the Future of Cannabis Pharma?

This website uses cookies to improve your experience while you navigate through the website. Out of these cookies, the cookies that are categorized as necessary are stored on your browser as they are essential for the working of basic functionalities of the website. We also use third-party cookies that help us analyze and understand how you use this website. These cookies will be stored in your browser only with your consent. You also have the option to opt-out of these cookies. But opting out of some of these cookies may have an effect on your browsing experience.
Necessary Always Enabled
Necessary cookies are absolutely essential for the website to function properly. This category only includes cookies that ensures basic functionalities and security features of the website. These cookies do not store any personal information.
Non-necessary
Any cookies that may not be particularly necessary for the website to function and is used specifically to collect user personal data via analytics, ads, other embedded contents are termed as non-necessary cookies. It is mandatory to procure user consent prior to running these cookies on your website.
SAVE & ACCEPT